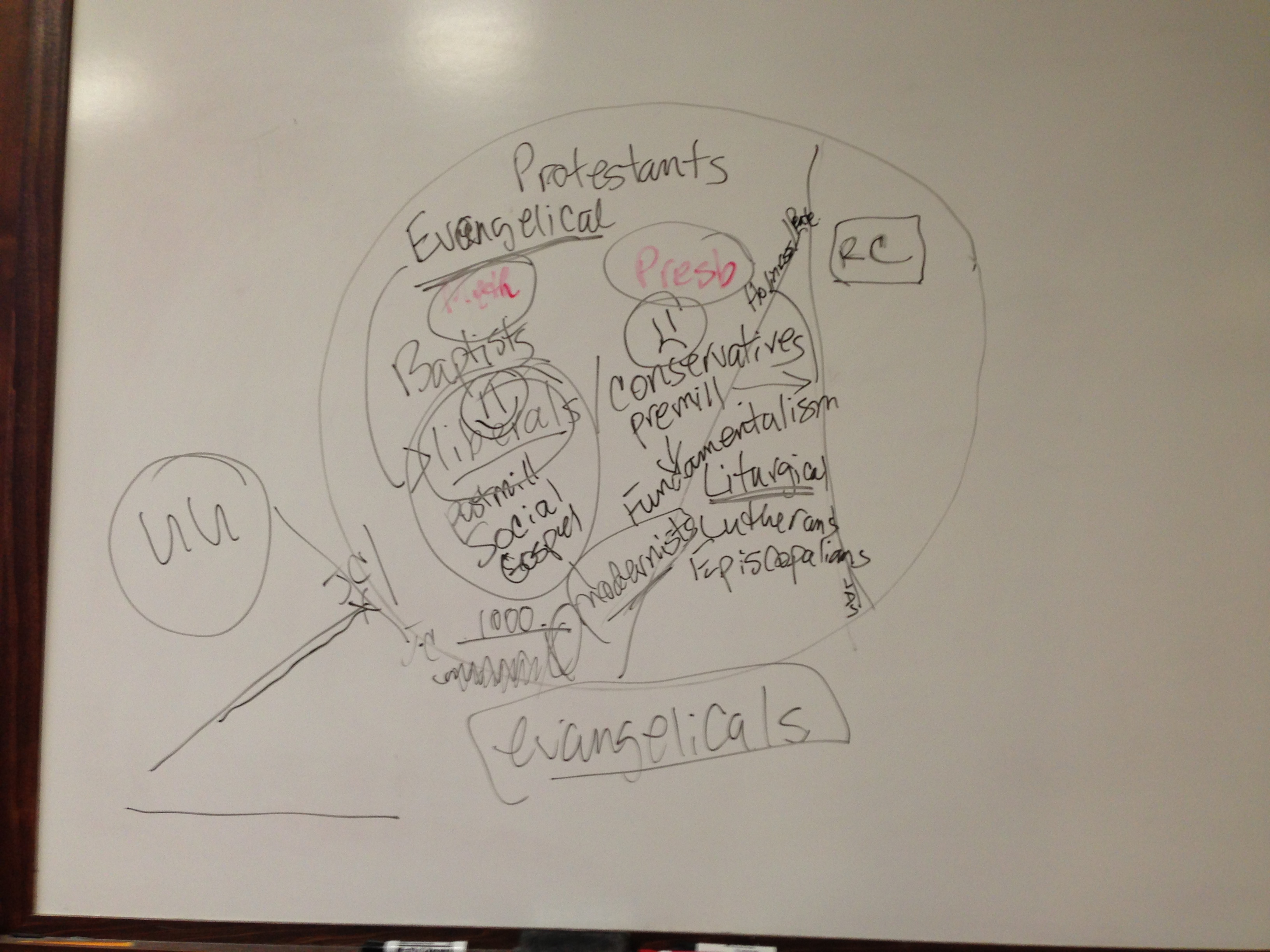 For the past few weeks, I’ve been pondering how the changes in the religious make-up of the United States have influenced the worldviews of my students. According to the Pew Center for Religion and Public Life’s 2015 report, Americans are heading down two radically different paths. The number of people who do not affiliate with a religion, or the “nones” as they are known in academic shorthand (and not to be confused with nuns–homophones are so confusing in spoken English), are increasing. But at the same time, those Americans who do affiliate with a religious body are maintaining their religious practices with no real decline. The Pew study was done with sound research methods, much better than the anecdotal trends I can report from my experience teaching American and European religious history. But that won’t stop me from describing my own observations and engaging, I hope, in a conversation with others who have recently written on this topic.

In the first group, the students look very much like the Pew study’s respondents. They have never attended church, except to appease a grandparent or to attend a funeral, and many, like Erin Bartram’s students, want to know why anyone would still believe something the millennials think merely justifies oppression, racism, violence, and war. These students, as Jolyon Baraka Thomas notes, have a set of notions that the religious studies classroom seeks to disrupt. I’ve banned what I call the “c-word” (crazy) from our classroom discussions, and I stress in each course that if you want to stop what you see is oppression, you need to understand its origins to better dismantle it. Thus, if you really think that religion is merely a tool for violence, you’d better be ready to explain the nuts and bolts of that view and not just toss around insults about the Crusades or the Inquisition. At the root of these students’ concerns about religious beliefs’ negative impacts is usually a facile or deterministic understanding of why someone believes. I try to work to ensure that they first understand the beliefs and then see how believers act upon those tenets.

In the second group, however, there are distinct challenges as well. While some believers come to class with an ecumenical outlook and enjoy the exchange of ideas, others expect that I will teach their “true” doctrine to the rest of the class and are sorely disappointed when I fail to comply. Indeed, one student approached me after class and said, “Professor Mathews, I feel like God is using you to test me.” As my institution’s student body has become more diverse, these “true believers” come from increasingly different backgrounds as well, such that, in addition to Christian “true believers,” I have some Muslims (certainly not all) in class who get frustrated when I don’t sound like their local imam. A few years ago, I taught a course on the European Reformations in which a group of Roman Catholic students and a group of evangelical Protestants waged rhetorical wars on each other every Tuesday and Thursday from 3:30 to 5 p.m.  I’ve also had a few students who are “true believers” who have taken religion courses or even become religion majors so that they can understand the secular beast and use its tools to destroy it from within.

In the “true believers” group, millennials’ passion for ideas and social justice especially shine. While some of my colleagues might see the millennials reflected more in the nones, I see them in the religious enthusiasm of the “true believers.” In religion, some millennials see the answers to a world that appears to be abrogating its promises to them. Religion rights wrongs, religion promotes dignity, religion embraces community. This is not to say that religious fervor is solely a millennial phenomenon, but to suggest that the millennials embrace it in a way consistent with their peers’ hopes and aspirations for a better world.

So how do we teach the millennials, full of passion and curiosity, and sometimes short on religious literacy? Here are some suggestions, and I welcome more.